by Miss Frankie Tease
Diaz Mackie is a professional comedy host and traditional raw observational style stand-up comedian, and it looks like he's just hitting a new career stride after celebrating his 34th birthday (January 30th 2012). A Detroit, Michigan transplant, Mackie has spent seven years as a resident of Las Vegas, almost six of them as a comedian. He's a local favorite, and you probably know him by his weekly raunchy stand-up appearances at 'Comics Under the Influence' (Black Door, Bikini Bar). Other projects he's done include 'Smooth Vegas Nights', 'Who's Got Jokes?' (Season Five, TV), and he is currently at two prominent Strip Vegas clubs including L.A. Comedy Club (Planet Hollywood) frequently, and King's Comedy Club (Rio) twice weekly.

Introducing heavyweight comedians from Comedy Central, HBO, and Showtime is what he does several times a week, entering his second year as a nationally touring comedian. He'll be staying busy with new and return visits to Arizona, California, Florida, Illinois, Indiana, Michigan, Oregon, Pennsylvania, New York, Texas, Washington state, and Wisconsin in 2012.


Mackie's humor includes self-deprecating humor about his lisp stating that it is "a 'handicap' after all". He combines hilarious racial, sexual, topical, news, and political jokes, and isn't afraid to perform clean or raunchy dirty. The CD includes some of the bad decisions he's made, and how changes in technology are effecting society. Mackie's first CD "#ThatSh*tCrazy!" is available now at any of his show appearances and reportedly at DiazMackie.com coming in the near future.


Jay Leno has had a long lucrative career and a long happy marriage. Those are two things you don't see in Hollywood very often, especially paired. Jay's self deprecating 'chin' humor along with his quirky voice, dyslexia, and lisp cemented his style of humor on stage first along side the likes of Freddy Prinz Jr. His comedy in the 70's before his late night hosting duties began, consisted of east coast west coast jokes, and clean but suggestive observational humor. He has always been known for thinking well on his feet and making whoever is in front of him the punch-line of the current joke or bit. He can lay into the audience like the best of them, and is a frequent practitioner of roasts like on his five day per week TV show 'The Tonight Show with Jay Leno' where the opening monologue is no less than a roast of whoever is topping news charts that day.
Selected weekend dates through March-October of 2012 Leno will be appearing in Vegas and present himself untelevised and unabashed. This show is presented as a part of the Aces of Comedy. Terry Fator Theater at the Mirage Hotel and Casino, 10pm various Mar.-Oct. 2012 dates. $59.99-$79.99 702 792-7777 or 800 963-9634, Mirage.com.

Going into his Eleventh season as head writer on the long-standing SNL comedy act 'Weekend Update', Seth has always had an excellent sense of sarcasm and biting observation in his writings and presentation of the faux-weekly news. He has had a long history of funny with the show during sketches too but seems to claim the longest running solo anchor and head writer position for the longest running segment of SNL above Chevy Chase and Dennis Miller who also sat on the throne.

Meyers has one night planned to hit the nail on the head here in Vegas and it should be exciting to see how his delivery differs in the stage arena vs. TV. Though not a newcomer to live performance, he'll be going from the highly scripted Saturday Night Live TV environment into this one-man show performance out of the TV news dialogue box. This show is presented as a part of the Aces of Comedy Tour at the Mirage. Terry Fator Theater at the Mirage Hotel and Casino, 10pm Mar. 23, 702 792-7777 or 800 963-9634, Mirage.com. 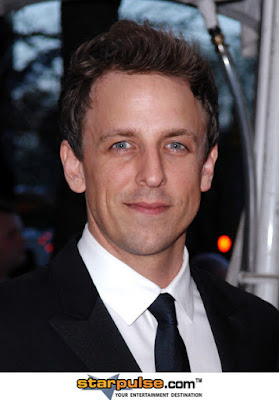