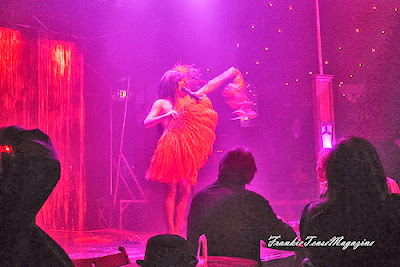 Dirty, crazy, adult circus, and Burlesque show Absinthe celebrated its' 500th April 1, 2012. That's no small feat for people that fly through the air, croon, and do just about everything one can imagine in a small time-period under a big white tent out in front of Caesars Palace Las Vegas, nightly. The show begins with Maxime Popazov climbing and balancing on wood chairs to an incredible height. He gives way to the Green Absinthe Fairy from the sky, Melody Sweets who while descending says, "Maxime, what am I going to do with all that wood?" Sweets begins singing "I've got what you're cravin', for your misbehavin", and begins working the very intimate 500 person tent. If you are at the show, you're practically in the show, thanks to Producer and visionary The Gazillionaire's close-up sight-lines, and in-the-round seating. Acrobats Men of Atlantis stacked each other, which gave way to the Trapeez act Ssens Duo. Oxtana Solamanchuck suspended from a rope above contorting and The Skating Kerkorians scared, stunned, and amazed us with skate aerial acrobatics, and we were relieved to see 2012 cast addition Angel Porrino delight us with her Sally Rand Bubble Dance tribute. The three tightrope walkers put our hearts in our throats while calmly slinking above a small wire. Outlandish sexual host and Producer The Gazillionaire and assistant Penny Pibbetts broke all the tension with laughs between acts. While the tightrope was set-up, I was pulled up on stage by Gaz and made to tongue kiss a Republican Wife. It was insane. But I stayed focused on the one interview I was here to get, Burlesque Star: Melody Sweets. Post-show to the sound of chairs folding, I got the interview and was impressed that Sweets was charming, enduring, stunningly gorgeous, and is also a self-made woman.

FT: Are you originally from NY?
MS: I grew up in California until I was around ten, and then I moved around a lot. East Coast, West Coast, and then I moved to New York in 1999, because I wanted to party like it was 1999 like Prince said.

FT: Can you tell me about the Rome connection? I heard you did a performance there. That's exciting.
MS: It was amazing. It's one of my most favorite places in the world, because my family is from Italy. It's very interesting, because they're very conservative also. But, it's all the rage. When I performed out there for the Burlesque Fest, Dirty Martini's photo was on all the buses. I was so proud of her.

FT: You're speaking about the top echelon of Burlesque performers in the world when you speak about New York. So how many Absinthe shows are you doing a week ?


MS: Six days a week, two shows every day except Wednesday and Sunday. Ten shows a week. That's a lot of pastie tape.

FT: For our Burlesque performer readers, Melody Sweets does not use Spirit Gum, she uses pastie tape. So did you first start doing Burlesque in New York?
MS: Yes, it was a happy accident. My band Goodfinger had gone into the studio to do our debut album. We started doing live shows, and a friend of mine was like "do you want to be part of our Burlesque Show?" and I said "as long as I can sing". I wrote the song 'Slice of Heaven' which you heard tonight. I write all my own music.

FT: You're an impressive woman. A Singer, a Dancer, a Composer, and a Star. So what can you tell us about your exciting upcoming new solo album?


MS: It's called "Burlesque in the Black", and you're the first person I've told the album title to. It's a compilation of songs I've written that took me all around the world to do Burlesque and get naked to, which is fun. Each song is a story, and each song has a Burlesque act. I can't wait to release it, I'm so excited.

Please check for the sweetest of haunting melodies to be released in album form at Melody Sweets' site MelodySweets.com, and follow her sweet tweets at @melodysweets

This exclusive interview with Melody Sweets  of Absinthe is also available at eBook retailers near you via iTunes, Amazon  Just click below for more info The Best of Frankie Tease Magazine Vol. 1. There are several more photos from the amazing show included in the ebook.