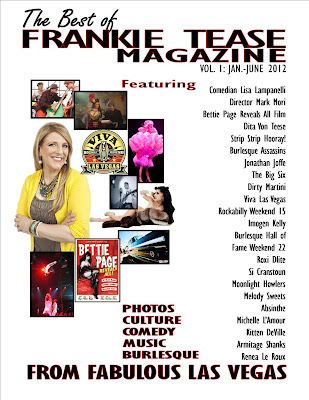 Frankie Tease (The Candy Pitch, Tease Time, Vegas Seven, FrankieTease.com) who was originally born in Long Beach, CA., has been a resident of Las Vegas, NV since 9/11/11, and she hasn't wasted any time. Recently she has collected the best articles she's written from her new Vegas home in 2012, and put them in an eBook, giving readers insight into culture, stage, and glamorous stars, from Fabulous Las Vegas. Setting up to publish (BookBaby) a series biannually, Frankie has already interviewed some of Vegas's best."It wasn't hard creating the first in the series: The Best of Frankie Tease Magazine Vol.1, with the amount of entertainers to cover in the Las Vegas area" according to Frankie Tease, who will become a published author for the first time with this effort.

At first attempting to publish a downloadable digital magazine, Frankie said "It became clear early-on in this project that there were far more distributors who carry eBooks, so an eBook was the only sure way to get these amazing stories to the subjects' true fans across the globe". A Collection of articles was the solution, and the book was conceived.

The Five W's about Frankie's Book:

What:
The Best of Frankie Tease Magazine Vol.1 is an electronic semiannual e-publication covering a few select exciting genres in Las Vegas, Nevada, published by BookBaby. Though self-titled, the articles have little to do with their author who serves as the "#1 Fan" type of reporter. Frankie has been covering Entertainment stories from Las Vegas since 9/11/11, and has been an entertainment writer since 2009 (Portland, OR.). As a life-long performer, an experienced producer, and a choreographer of Ballroom and Burlesque for many years, she's no newbie to stage production. Frankie brings her enthusiasm for the arts to each article, using her connections with amazing entertainers to get great stories.

Why:
Desiring a world-wide readership to match the world-class entertainers she has interviewed and reviewed, Frankie decided to take the online articles and turn them into an eBook consisting of the most popular reads from the website (to be published each half-year) and adding exclusive stories and photos, which have never been published. The book is in ePub digital format and is now available for download at eBook retailers near you or on your favorite device (please see list below for details).

Where from:
The topics of this book's edition include International Artists and events that have come through or will come through Las Vegas, Nevada, from: Australia, Canada, Great Britain, and the United States. Features from U.S. cities include: Willsonville, AZ., New York, NY., Seattle, WA., Chicago, IL., Los Angeles, CA. and fabulous Las Vegas.

Where & When to get it:
Check out  The Best of Frankie Tease Magazine Vol.1  on your favorite eBook Reader according to the dates below:


more...
Though covering many vintage-focused themes and artists, the book is full of exciting current and modern content and photos, creating a wonderful juxtaposition of eras and genres. Whether you are fans of the Burlesque, Comedy, the Culture of Las Vegas, Music, or just looking for a fun informative read to stir your imagination, you will find it in the Best of Frankie Tease Vol.1, Jan.-June 2012.