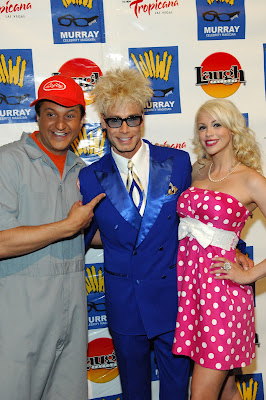 Murray Sawchuck (39) exemplifies being hungry to perform and raise the art you're involved in to the public's eye. The prolific TV and film star only takes a break from his grueling almost daily Las Vegas show appearance schedule to do more shows - this time in Australia- and that's after he just filmed five episodes of a new kids TV series called "The Jadagrace Show". Not to worry. Even though the show goes dark until its Oct. 1 return, Murray will still offer his spectacular magical madness at the Laugh Factory at Tropicana. Put this quirky talked-about show on your calendar as a local Vegas favorite.

Known for his record-breaking finale' trick on Amarica's Got Talent (making a ginormous model train disappear) before over 20 million fans, Murray has appeared as a headliner at Hollywood's "Magic Castle", and is an annual host at Alice Cooper's Arizona Christmas charity. Murray John Sawchuck was born in Burnaby, British Columbia, and accomplished becoming an American citizen two years ago.

Murray's live show is also supposed to be pretty hilarious and audience-interactive. Murray has appeared on TV and stages alike with his amazing magic tricks, and according to his reviews and blurbs he's a tough act to follow. Apparently this 360-degree-view stage will show you everything and leave no doubts. Murray has been said  to quell even the most magic-suspicious audiences.

At age seven Murray was given a Siegfried and Roy magic kit that changed his life. How ironic is it that he performs on the same Strip where the famous act used to perform? Very. Murray envisioned himself as a magician that sang and danced, and with his musical talent in several of the woodwind family, he could still pull that off. With over 24 awards currently as a magician, Murray also holds the title of "World Champion" internationally and has performed from the Playboy Mansion to Monaco and Paris.

This is one of those shows on my must-see list so look for photos and a review soon. This show is all ages and family friendly. In addition to the new Laugh Factory, check out the "South Beach" inspired remodel of the Tropicana Hotel while you're there. It's amazing.