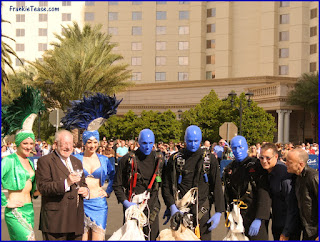 Festivities kicked off at the back of the Monte Carlo property around 10 am, on Wednesday Oct. 10, 2012. Workers, press, and public were seen gathering to take in what was heralded as the Blue Man Group skydiving into the Monte Carlo (Las Vegas, Nevada). As I approached the area, everyone was focused on the plane circling above. Soon, five men had jumped from the plane and were air-born (three Blue Men and two auxiliary men), barely visible - just specs in the sky -they slowly descended toward land. As they came into view overhead they appeared to have an accelerate trail behind them. Red Bull parachutes became visible and one by one The Blue Men navigated through blue skies and low winds onto a huge plastic blue tarp on the cement acting as their landing area. It was short, and very ambitious. They arrived to great applause and moments after, they began posing for photos with Mayor Oscar Goodman and his showgirls, Co-Creators of the Blue Man Group: Chris Wick and Phil Stanton, as well as Monte Carlo GM Patrick Miller. It was one of those publicity stunts you rarely see, but always hear about. It was a very brief, but memorable few minutes.

The Blue Man Group has enjoyed success at the Venetian and other Vegas hotels, but today they arrived at their new highly anticipated "Blue Man Group" Theater at Monte Carlo. The festivities wound to inside the Casino, in front of their new theater. The crowd was greeted by several of the people involved in bringing the show to Monte Carlo, and then given a short performance by three of the Blue Man Group. They used huge xylophone-sounding drum tubes to make great rhythmic sounds, cutting through the casino noise that had been in the background. Lights were changing in unison to the sound, and in traditional Blue Man Group fashion, they brought an experience, and chills. In place of the ribbon cutting we saw skydiving, and here is what the men involved had to say about it.

Previous Mayor of Las Vegas Oscar Goodman:
"This is really special. Only in Las Vegas could you have an entry like we just saw. If you missed it, Blue Men will be doing it again in a half an hour folks [crowd laughs]. That's what makes us the entertainment capitol of the world. A beautiful facility like this with amazing shopping and dining, it doesn't get any better. Thank you for having me here with my showgirls. I have my five o'clock watch on, it's 5 o'clock somewhere. I'm going to toast to the Blue Man Group."

Monte Carlo General Manager: Patrick Miller
"I don't think anyone should drink alone, especially at 10 am. I think there's some gin in the house. Thank you all for coming. On behalf of the 2600 employees here at the Monte Carlo and the broader MGM family, I'd like to officially welcome the Blue Man Group to Monte Carlo. Two years ago, I was excited just to start the conversation of the possibility of bringing the Blue Man Group to the Monte Carlo. Today I'm thrilled to stand in front of the Blue Man Theater on the day of the first show, congratulations. Las Vegas and MGM Resorts is known for the Best entertainment in the world. The Blue Man Group's new show at Monte Carlo raises that bar, yet again. We are excited, and we're going to have fun doing it."

Blue Man Group Founder Co-Founder Chris Wink
"We feel like we've really found our home. We've had a lot of homes here in Vegas, and this is the place for us. You just got a taste of the kind of fun we're going to have here. This radiating pattern that comes out from the theater, is a symbol of what we intend to do. We're not just going to have a show in the theater, we'll be having fun all over this property. Monte Carlo is prodding us, "What else can you do? Can you skydive?" And the MGM Resort Group is the right partner for us. We are excited for you to see the show, because it brings it into the 21st century. It's just the beginning of many exciting things to come here with Blue Man Group at the Monte Carlo."

Blue Man Group Co-Founder Phil Stanton
"I don't know what to add to that since we decided that the Blue Man Group would be silent, long ago. We have been in anticipation of this moment for a couple years now, and we are excited about it, thank you for being here."