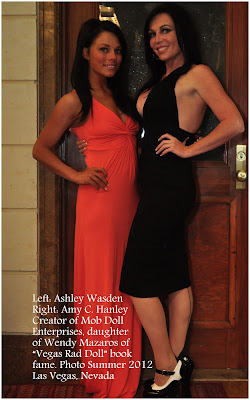 The Vegas mob that settled in the early days of Sin City, left offspring and widows who remain today. But this isn't old Vegas, nor is it the 1950's- what mob? Well, the mob isn't exactly running Vegas as it once did, but some women are making their mark on the city where they were raised, and they mean business. Widow and Mother Wendy Mazaros, has had most of 2012 to campaign her tell-all book "Vegas Rag Doll" with the help of her daughter Amy. But, coming more into the limelight this December is Amy C. Hanley herself, the daughter of a mob boss. She has a lot in the works, including launching her own couture  and a starring appearance in the new reality-based Vegas TV show entitled: "Sin City Rules". For this conversation, we focused on the making of the reality show and how she was cast. Here's what she had to say when we chatted the morning of election day in Las Vegas, Nevada, 2012.

FT: You're an amazing fascinating character. You have played the role as second fiddle being the daughter of a woman married to the mob, what's that like?
AH: It's a unique story. My mother is considered a mob doll. The reason for that is she married a reputed Mob Boss of Vegas from 1936-1979 - which is when he passed. The father who raised me was also OC connected. And when I say OC, I don't mean Orange County [laughs].
FT: That's been very sensationalized. I admire your Mother taking what must have been a difficult and painful experience and turning into something like the book "Vegas Mob Doll" Has it been well received?
AH: Yes my mother's book has been well-received. She's done a lot of the marketing on her own. She actually started before the book was even written, which was a huge benefit. Obviously I've helped her along the way myself. After her book is when I ended up getting cast for the show.
FT: So the new show for TLC is called "Sin City Rules"?

AH: Yes originally the title was "Vegas High Rollers" and after they did some testing and ran it through, they came back with Sin City Rules. It's got two meanings. One, Vegas rules - obviously. The second one is we live by our own rules.
FT: Is it a shift for you to in the spotlight and to be the star?
AH: It has been a shift. I'm not a big reality TV watcher, in fact I don't even have cable TV in my home. When they approached me with the show and everything started to happen, I didn't really realize all I was getting myself into. I have to say, when it's all said and done, it's been a really great experience. I did get to work with a lot of other good women. Obviously with any show when you put six very strong women around you, we're definitely going to have a little bit of drama.
FT: They just call that good TV.
AH: They call it great TV. We're scheduled to premier Dec. 9, 2012. They're using this show to re-brand. Right now TLC is in that mode, you know more family oriented type of approach. They want to get a little bit of a piece of what the mob is. That's why they hired Evolution who produced Bravo's Housewives of Beverly Hills and Orange County. They did the casting for our show, and the production of it. You guys are going to see when it comes out, it's going to have a lot of feel of the housewives show, but -here's the great part- all of us women are not dependent upon our husbands.
FT: So that's why it's not called Housewives.
AH: That's exactly why it's not called Housewives. To be fair the only two who are single on the show are myself and Alicia Jacobs. Alicia is going through a divorce. Lana, Lori, Jenna, and Kimberly are married and they have that extra help in there when it comes to income. But we've all made our way in this industry having our own businesses. It definitely makes us a bit more unique than the housewives shows.
I was married for 13 years. I was a housewife, but I was actually the bread-winner in my house. My mother was married to Tom Hanley. Me myself, I was married to [removed at the request of x-husband] someone I met when I was 21 years old, who was totally different than what I grew up in. I grew up in a male dominated mentality, kind of culture. I grew up in the mob, in it and around the lifestyle. [This entire paragraph was removed at the telephone request of her x-husband].
FT: With your upbringing and seeing women dependent upon men, one thing you have done is to be your own bread winner. But after all of that are you now a feminist as a result of what you went through?
AH: I don't think I'm a feminist. I'd say more of a classification for me is I just think I'm a control freak [laughs]. I have been growing up in a lifestyle where women are dependent upon men. I saw my Mother dependent upon men. I saw the roller coaster ride she went through and everything that she dealt with. I think for me it was more of a "I don't ever want to go through that". That's really what it came down to. I was more of a realist. Let's deal with reality and not live in this fairy tale land.
FT: There probably aren't that many of you are there?
AH: You'd be amazed. There's a lot of us out there but there's a lot of us that don't talk. You are raised a certain way in this culture. Keep your mouth shut, don't come out. You deal with it. I grew up in a lifestyle, I'll tell ya' Frankie, I was taught at a very young age that showing any sign of emotion was weakness. I was basically raised to shut down my emotions. I sometimes have more of a male mentality about stuff like that, than I do a female mentality. That's why when I get involved in business, I do very very well. Sometimes men don't see it coming, which is to my advantage. When they see me they think "Oh, she's a woman, she's over-emotional, we can rattle her cage." That's not the case with me. I'll be honest I have issues in personal relationships because of shutting down my emotions and kind of dealing with it like a man would. 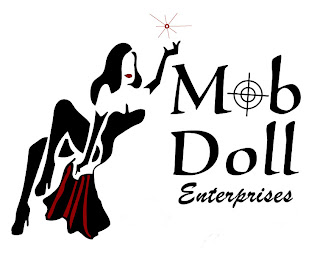 Mob Doll Enterprises brand new logo.
"I wanted to make sure she was sexy, and still had some power to her. That's why I added the red in, red is the definition of power." said Amy C. Hanley of her new logo.