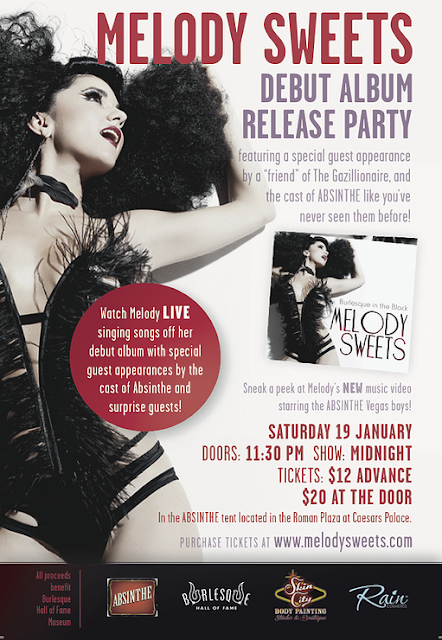 Melody Sweets has had music featured on MTV, VH1, A&E and National Geographic on hit shows such as Celebrity Fit Club and PUNK’D. She is also the first performer in the history of burlesque to have produced, written and starred in her own music video for “Slice of Heaven.” A lover of the arts, Melody Sweets has had the privilege of performing for and collaborating with such acclaimed artists including STING, Björk, Moby, Alice Cooper, The Bravery, Marc Jacobs, Fergie of the Black Eyed Peas, Adriana Lima and Harvey Keitel."

Since 2011 fans and tourists in Vegas have enjoyed the starring role Melody Sweets plays in the top-notch production Absinthe. As promised during my 2012 interview with her (in Best of Frankie Tease Magazine Vol.1 eBook) the star has brought an entire album of her original brand of music to us entitled "Burlesque in the Black". Enchanted by her voice and style, many fanatic fans have been waiting more than a year as the artist worked to finalize her album between ten shows a week at the Ceasars Palace tent.

This Jan. 19, 2013 is Miss Sweet's night as she takes time to perform live and present songs off her brand new album. Come one come all, and enjoy Sweet's seductive melodies while contributing to the Burlesque Hall of Fame Museum (all event proceeds go to BHOF). Penthouse Forum said “’Tease Queen’ Melody Sweets is a dynamite little package ready to explode in a big way!” I don't know what that means, but I know I want to be there when it happens. We'll be on hand to cover the story, so see you there.