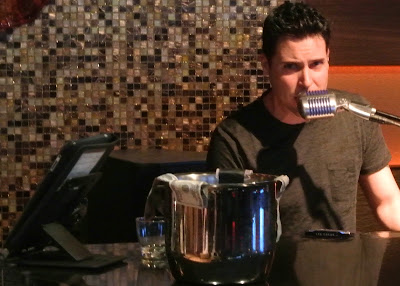 A late night jam session "like old times" with the boys was announced online via Twitter by Frankie and Tony Moreno on Friday March 8, 2013. Singer at Gold Rush Lounge at the Golden Nugget downtown Harry Shahoian introduced the Stratosphere star who sat at the piano in front of a beautiful vintage michrophone. He powered through a sexy rendition of "Stray Cat Strut", seguing into "Fever" to treat standard lovers in the crowd to some classics. Moreno and crew were set to take a break and go another round by 1am.

Video and photos by Frankie Tease.

Read the full show review and interview with Frankie Moreno from the Stratosphere in the ebook "The Best of Frankie Tease Magazine Vol. 2"
more info on that HERE.