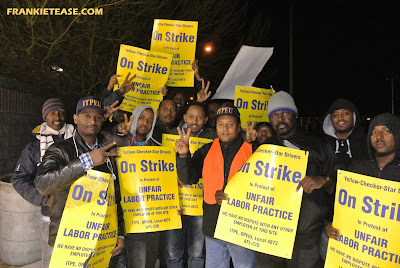 The wind was up this spring night as hundreds of workers began day two of their strike on Yellow Checker Star Cab Company in Las Vegas, Nevada. The headquarters are situated somewhat near the strip at Decatur and Post Road. Some people (females and males) had been there for 12 hours or more striking, and greeting workers who hadn't heard about the strike with chants of "turn around" as they drove in to work. Those who went to work and didn't stand in unity with the striking workers were greeted with "shame on you". What do they want? A raise and respect. When do they want it? Now. View video and photos of my hour with the workers below.

Two different cabbies with the union speak about
why they are striking
Direct video link http://youtu.be/OjBYKLXsvjc


Drivers who are on strike speaking to
Frankie on Post Ave. and Decatur
Midnight Mar. 4, 2013
video direct link http://youtu.be/-UQTd8f8oHE

Workers dance to keep warm while winds begin
to whip and cool things down at 1am Mar. 4, 2013. 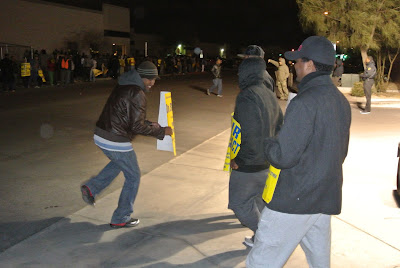 Photo and article by Frankie Tease for
Frankie Tease (online) Magazine based in Las Vegas.
Please send comments or corrections to
http://www.frankietease.com/p/contact.html