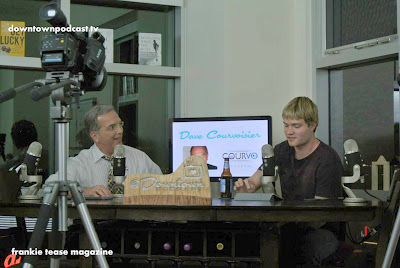 
A couple weeks ago I was a guest on the Downtown Podcast [downtownpodcast.tv]. The podcast focuses on local Vegas Tech news, things afoot in the area specific to Downtown Las Vegas, and a variety of guests for good measure. As a weekly, I was impressed to learn that it was 100% volunteer effort by those in charge at TicketCake.com. I have been watching the changes to Downtown Vegas since I arrived end 2011, and I was shocked how it accelerated in 2012 as so many businesses started to move into the area. They even showed signs of local sustainable culture like walkability, bike lanes, community organizing, a massive First Friday arts event (not new but becoming huge). I just had to speak to the crew to get some info for my readers on what all this Vegas Tech stuff is about, and how it has started a cultural revolution. Remember, this is happening in an area considered by tourists as "not the Vegas strip" but coveted by locals as the original "Old Vegas". The interview turned into a group effort with the three co-founders of TicketCake.com Jacqueline Jensen (co-founder and COO), Dylan Jorgensen (co-founder and CTO), and Joe Henriod (co-founder and CEO). Let's see what they were thinking when they moved to Vegas from the start-up's city of Salt Lake, and what they have to do with the CEO of Zappos Tony Hsieh.

How and when did you fund TicketCake.com and what was your inpiration to move from Utah to Vegas?
JJ: Our team came to visit the #VegasTech scene in February 2012 and moved the company to downtown Las Vegas three months later. In July 2012, we officially closed our seed round with the VegasTechFund, which is a $50M arm of the Downtown Project.  TicketCake.com was the 7th company funded by the VegasTechFund, which now has over 20 funded companies in the portfolio.
DJ: We were inspired by what was happening in the #VegasTech scene from the moment we arrived to downtown Las Vegas. The enthusiasm and concentration of like-minded people really surprised us in a place like Las Vegas. Salt Lake City was a good place to start the company in January 2011, but downtown Las Vegas was the best place to grow TicketCake.com.

Why did you launch the Downtown Podcast, and why is it successful?
DJ: The Downtown Podcast was created to help curate all the local news and events, as well as get to know some of the remarkable visitors coming into downtown Las Vegas to see the Downtown Project firsthand. It's a weekly video podcast where we document a citywide revitalization project unlike any other.  The success of the Downtown Podcast comes from the passion of the volunteers involved. Each week, community members step up to provide talent, organization, and even video equipment to make the episodes entertaining and valuable. I've joked with some in the community that because this is an all-volunteer passion project, the end result is much better than it would be if it were a just a paid job.

What's it like living in the Ogden Building Downtown Vegas, and how long have you been a resident?
JH: The Ogden in downtown Las Vegas is a great place to live and work. The Ticket Cake team moved into The Ogden in May 2012. Being part of the downtown community is very important to our team, so living in the middle of all the action was a must.

What advice do you have for young developers and entrepreneurs that are up and coming nationally and in Vegas?
JJ: Our team encourages entrepreneurs, doers, and like-minded people to come visit downtown Las Vegas to see what's happening here. The #VegasTech community is unlike any other in the world, and the idea of viewing the city as an incubator is intriguing to many people in the tech and startup world. There is so much to be learned from the values the community in downtown Las Vegas holds that you can take with you to your neck of the woods.
DJ: For tech people already living in downtown Las Vegas, our team would encourage you to take advantage of the serendipitous collisions that happen each day here. Are you attending tech meet-ups? Are you getting out of your comfort zone daily? What are you contributing to the community here? If you aren't meeting new people and opening your mind to new ideas, you aren't doing it right.

What are you currently most excited about that's developing in Las Vegas?
JH: Because we are passionate working with event organizers, it's exciting to see more events happening in downtown Las Vegas. The Life Is Beautiful festival is sure to be a success, and we cannot wait to help in any way we can. We are meeting with new organizers nearly every week to talk about helping them plan their dream events - from fitness events downtown to film festivals. It's an exciting time to be downtown.

What do you hope the Downtown Vegas area will be in one year?
DJ: As long as growth continues at the rate it is now, downtown will be a great place one year, three years, and even 10 years from now. We are always excited to hear announcements from the VegasTechFund about new companies that are moving to downtown Las Vegas. When Zappos moves to downtown Las Vegas (Sept./Oct.2013), we think small business and tech growth will happen at an even more accelerated pace, which helps the ecosystem greatly.

You went to SXSW this year as #vegastech. How did it go, why did you go, and what was the result?
JH: The #VegasTech presence at SxSW was phenomenal. It was remarkable to see the community come together and achieve something great. Ticket Cake was one of the first startups on board with the plan to go to SxSW, and our goal was to simply tell others about our team, our product, and our community.
JJ:  Vegas was definitely put on the map at SxSW thanks to efforts from entrepreneurs, organizers, and startups who attended from downtown Las Vegas. There was also an amazing amount of support online from supporters back home, which fueled the efforts on the ground in Austin.  It was our team's first time visiting Austin, and we had a great time!

Look for more from the crew at their weekly podcast via downtownpodcast.tv. You can even attend the show's taping or sponsor the show, do inquire. Visit their business website and buy or sell tickets from anywhere with ease at ticketcake.com.

See FULL SLIDESHOW OF
Photos of Downtown Podcast 17
Ft. Dave Courvoiser and myself