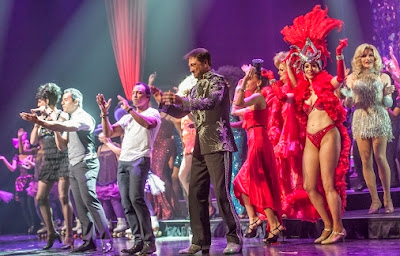 Rather than try to cover already covered ground, I thought I would republlish the press recap of an important Southern Nevada charity helping men and women living with HIV AIDS.

Golden Rainbow celebrated 27 years of service to men, women and children living with HIV/AIDS in Southern Nevada at its 27th annual “Ribbon of Life” fundraiser at The Smith Center for the Performing Arts on Sunday, June 30.

In addition to the fundraising spectacular, Golden Rainbow hosted a silent auction with exclusive prizes including tickets to some of Las Vegas’ top shows, dinner at the city’s best restaurants and trips to premier destinations. The celebration continued at Mingo, Kitchen & Lounge for the official “Ribbon of Life” after party where cast members and guests came together to honor the success of the show. For every “Sweet Sensation” drink purchased, Mingo, Kitchen & Lounge donated $2 back to Golden Rainbow.

All proceeds from “Ribbon of Life” benefit the nonprofit’s efforts in providing housing and direct financial assistance to the Southern Nevada HIV/AIDS community. As a result of the last year’s fundraising efforts, Golden Rainbow provided 8,184 nights of shelter, 527 days of utility assistance, 1,054 days of transportation and medical and dental assistance to more than 500 households in 2012.

“Ribbon of Life” 2014 is set to return to The Smith Center for the Performing Arts in July. For more information on Golden Rainbow or to order copies of this year’s “Ribbon of Life,” please visit www.goldenrainbow.org.

About Golden Rainbow
Golden Rainbow is a nonprofit organization that provides housing and direct financial assistance to men, women and children living with HIV/AIDS. Founded by members of the entertainment industry in 1987, Golden Rainbow is committed to serving the HIV/AIDS community through fundraisers like Ribbon of Life and HIV/AIDS related education. For more information, visit www.goldenrainbow.org or call 702.384.2899.