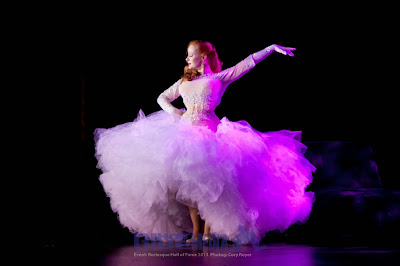 The Burlesque Hall of Fame Weekend held its 56th annual all-star Burlesque Showcase and Tournament of Tease Weekender Event, May 30 - June 2, 2013 at The Orleans Hotel & Casino in Las Vegas, which was established as a fundraiser for the Burlesque Hall of Fame's at what is now a tiny little museum storefront in Downtown Las Vegas. The event has been held at many locations in the past since 2006 when it moved from Los Angeles to Vegas. Venues for the event have included the Palms, The Celebrity Theater, and The Plaza Hotel. The Hall's Weekender has experienced a lot of drama among organizers including during 2011, rivalry among board members [Wall St. Journal]. But there was no sign of any of strife at this year's event held during the first week of June as is its tradition featuring a competition, awards, and showcases. 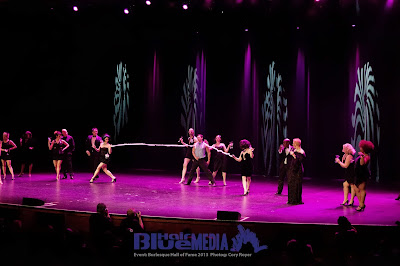 Icons and Allstars at BHOF by Blue Hair Media

A highlight of the 2013 event was when Dita Von Teese (a BHOF board member)  surprised the crowd and took the stage during the Sunday Icons and All Stars show to give long-time friend and performing legend Catherine d'Lish a coveted "Sassy Lassy" award, reserved for a select few each year. 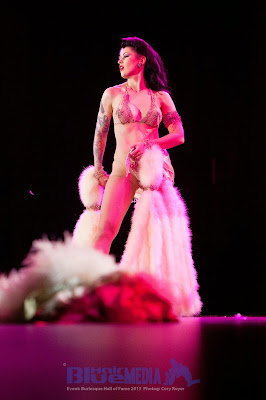 The famous "Tournament of Tease" took place Saturday night and the new Queen of Burlesque was chosen by a panel of judges. LouLou D’vil (Finland) was crowned the new queen for 2013, while second place was bestowed upon Sydni Deveraux (Seattle) and third place was handed to Lola Frost (Canada). 2013's King of Boylesque is BHOF favorite and returning solo performer Ray Gunn (Chicago/Stage Door Johnnies). There were other categories of winners such as best debut, best duet, and best group. The weekend showcases many types of talent in the 800 person showroom Thursday through Sunday and during the day offers classes, panels with legends, and a bizarre. I can't help but wonder if the word actually got to the public about the Burlesque Hall of Fame (a 501c3), how it would be received. Perhaps its yearly attendance would go from approximately 2,000 to match that of Viva Las Vegas Rockabilly Weekend (held at Orleans) of 12,000 (20,000 for Sat.). With only an 800 person showroom, and a fundraising ticket price, the weekender is still reserved for a devoted few, albeit international in scale. For now its organizers are content to use the annual festival to gather, teach, and remember legends. Though many of the original founders of this event are no longer involved, it will continue to be a beacon of talent in the world of burlesque for many years to come. 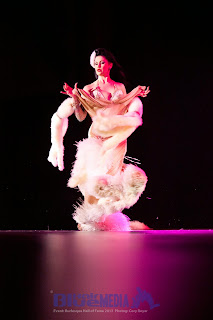 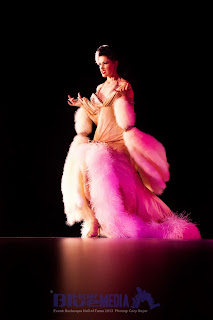 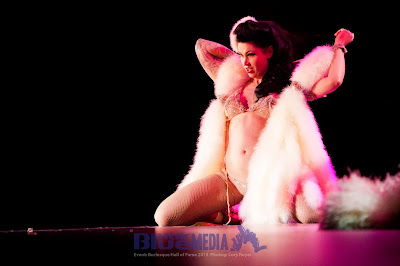