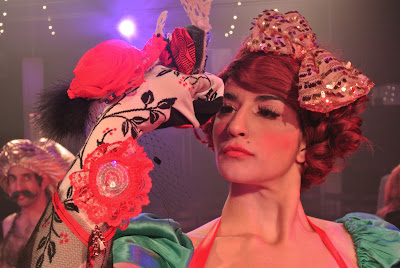 There once was a show called Absinthe, it took New York stages by storm and it moved to Las Vegas, its premise outrageous, a side-show side-kick star was born. This co-host wowed and horrified audiences with an unorthodox comedic puppet show, and relentlessly inappropriate foul mouth. Nothing was off limits for the Queen of Sock Puppetry Penny Pibbets, especially after year one.
In 2012 Penny Pibbets was named the "Funniest Woman in Vegas" in the show's second year being named the "Best Show" in Vegas several times over. The show was signed at least through Oct. 2013 to remain at the Roman Plaza at Caesers Palace, with a possibility for a contract through 2014. Pibbets continues to present her own brand of zany antics in her secondary spotlight as the Gazillionaire's assistant in the Speigelworld tent ten times a week at Ceaser's Palace. The distinct voice she uses for her sexually explicit sock puppets will stick with you. After seeing the show, hers is a voice friends and I tried to replicate on a daily basis. The puppet's ornation will inspire you, and the child-like spoutings about adult topics mixed with odd fairy tale imaginings (like unicorns and jizz) will surprise you.  But alas, there can be only one. I sat down with the inventive and wildly in-character-at-all-times Penny Pibbets. This is how it went.

FT: First of all, what's a Pibbet?
PP: Pibbet is my grandma's maiden name. She comes from a long line of Pibbets' who had changed it from the Piblosckia's because of the war. Although, I do have a strange feeling that I'm adopted because my mother always used to whisper that in my ear before I'd go to bed.

FT: How long have you been Penny Pibbets on stage?
PP: I've always been.

FT: Where did you get your stage start? Have you always been comedic?
PP: You're hilarious. I started performing when I was 3 and I'd do productions for my stuffed animals. They were great shows. I had pyrotechnics and everything! I still do it for them from time to time although, the animals have gotten really bitter and critical. They're not shy to give me notes and they've thrown tomatoes.

FT: Part of your character is being the verbal punching bag for the Gazillionaire. What's that like?
PP: Oh, I'm so lucky that the Gazillionaire is as nice as he is. I'm sure I can be annoying and quite an idiot. Yesterday I really spilled the beans. He was so upset. He loves Mexican food.

FT: How did you get caste for Absinthe the stage show and are you part of the New York original cast members?
PP: I was never really cast in the show. I was hired as an intern and now I'm The Gazillionaire's (self appointed) assistant. I follow the Gazillionaire around until he yells at me. Then I do whatever he's yelling at me to do. One day in New York The Gazillionaire decided to give me a chance ( I think because he was drunk/had to pee) and I hopped onstage and said whatever came out of my mind... and people laughed.

FT: How did you develop the hilarious voice for Pibbets? It's like Word Girl meets an imbalanced sexual teen-age deviant.
PP: What voice?

FT: What is your weirdest audience moment to date as Penny Pibbets?
PP: Someone had a heart attack while I did my puppet routine. That was awesome!

FT: Are you writing your own material? How do you come up with these wild concepts?
PP: When you use your imagination, the possibilities are endless. (Ooohhh...that sounds like something that would be written in a Lisa Frank notebook.)

FT: What is your favorite word ever?
PP: Gargantuan.

FT: Let's talk sock puppets. Sock puppets are an underground tradition in America and you can get away with almost anything because it's fictional. It seems to go really great with burlesque and having sexy dirty sock puppets is totally amazing for some of us. How did you get into the sock puppet portion of your act?
PP: It came to me in a dream. Then I woke up and I had sock puppets on my hands. They told me to make them pretty. So I did.

FT: How many sock puppet characters have you created and do they all have names?
PP: Millions. They'd be pretty ridiculous without any names, don't you think?

FT: What's national sock puppet day about?
PP: A day to celebrate your inner voice then, try not to kill too many people.

FT: How long are you contracted to play in Absinthe and how long is the show scheduled for at this point?
PP: Forever and ever!

FT: Would you ever do your own album?
PP: I'm writing a musical right now. It's going to be epic. I also have bands I play with from time to time (Fish Circus).

FT: What are your plans for the future and will you always be Penny Pibbets?
PP: Who else would I be? Charro? Oooh, that would be pretty cool because she's nuts and her boobs are awesome!

FT: Oh yeah, what sign are you and are you single (for all the ladies and gents reading this)?
PP: I would probably be a YIELD sign. Like "slow down and be careful cuz you don't know what the fuck is happening." I am also single.

Haven't seen Absinthe? You are in the minority. Check out Absinthevegas.com for more information. Find out about Penny Pibbets band at Fishcircus.com. Read this character on Twitter @PennyPibbets. 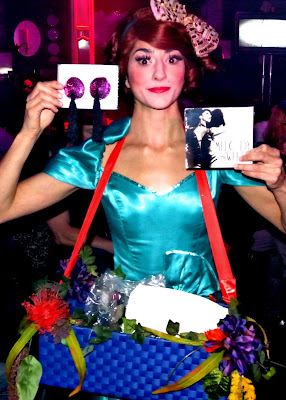