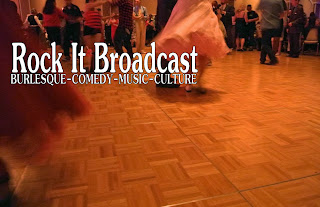 Hey welcome to the Rockit Broadcast for Nov. 11, 2013, I'm Frankie Tease. In Burlesque- Viva Las Vegas opens its submissions for the VLV Burlesque Competition. Victoria Danger and Tom Ingram are back as co-producers of the show, and back to more audience voting in the procedure (according to Tom). The annual festival in Seattle called Burlycon took place Nov. 7-10. Organizer Miss Indigo Blue has long been a go-to burlesque figure in Seattle and works with Jo Weldon (a burlesque author and professor) in New York and other committee members to make this 6th annual event possible. Some may be surprised that it's not a weekend of performances, but of learning and meeting peers and idols. Learn more at burlycon.org. In Comedy- The Fun Fun Fun Fest in Austin Texas just wrapped up. It was a combo of music and comedy, an excellent pairing. My sister said it was a hit in those parts. They even featured hip female comedian Sarah Silverman. Ok. Comedy Central's Up Next talent search semi-finals are in progress. The contest has gone through Chicago, Ft. Lauderdale, Boston and San Francisco and is now ready for your vote to bring it on home. The online voting begins Monday Nov. 11, 2013, so if you have a vote to cast on some new national comedic talent, do it at comedycentral.com and search for "Up Next". The All Jane No Dick comedy fest wrapped in Portland OR. end of Oct., but it's still got a great website to find out about headliner level female comedians. You know we need more of those people, and I mean the good ones please - see alljanenodick.com. Music- has The Rev releasing new music Nov. 11. This week you can hear the single "Let Me Teach You How To Eat" featuring a fully produced video with burlesque starlet and Duchess of Chicago Michelle L'Amour. (I've rarely seen anyone bring down the house with skills and surprises like L'Amour). So I wonder what the album will be like? So many rev fans are in anticipation of his new tracks. With the sarcasm usually involved in the Rev's lyrics, I can only imagine what "Let Me Teach You How To Eat" is about. Dang. Go to reverendhortonheat.com. He's on Victory Records now. Oh, and since we all call him that, he went and named the album "The Rev". It's his 11th album in 25 years of entertaining. On a quick note: Moonlight Howlers put out their album and are heading to Europe for a tour. But not before they got their equipment stolen at a Flagstaff hotel this weekend according to Mother Howler. I just hope whomever stole all their equipment rots in hell. Check Facebook for Moonlight Howlers or Raf Weatherly. Vintage Trouble has a new video out that's sexy as hell. I was watching this thing they posted on their YouTube and had to bite my knuckles. Get on and use search words Vintage Trouble Jezzebella (Official Music Video). There is milk involved. It really does a body good. Culture- The new Bettie Page movie and official narrated documentary by Bettie herself was done by Director Mark Mori out of (NY). The film is now hitting wider release in theaters and you can see if your city if you're ready to hear the story of the most famous pinup girl of all time, in her own voice narration before she died Dec.of 2008, visitbettiepagemovie.com. You can also search its title: Bettie Page Reveals All. Don't miss it in your town, for me it's coming to Vegas soon, yipee. Voting for the People's Choice is in progress now and I think Conan O' Brien is in the running. See who else is getting votes and cast yours at peopleschoice.com. The creator of Viva Las Vegas Rockabilly Weekend is casting actors for his new film entitled "Rockabilly: a Cinematic Music-Driven Comedy. Want to be considered ask Tom or navigate your browsers to kickstarter.com and use keyword search rockabilly or Tom Ingram - until Dec. 8, 2013. I can't wait for that film to come out. Impressive Tom, impressive. This week's back track is by the Moonlight Howlers.