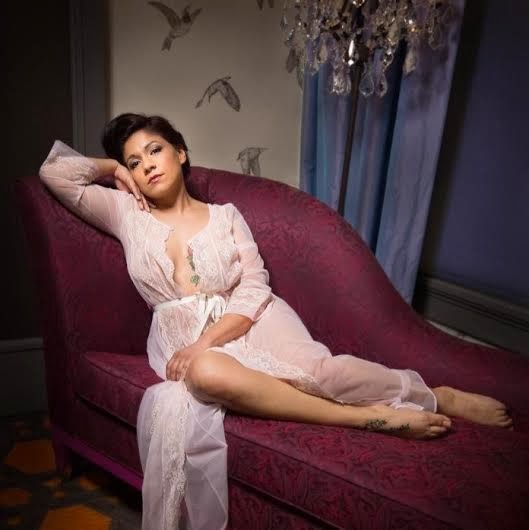 Ellie Darling by Through the Looking Glass Photography

Ellie Darling has had a place in Portland and Oregon burlesque for a long time. She's a native of the area, and has consistently for over four years mixed fashion, pin-up, live music, and burlesque at her shows which are usually mid-century focused. I've been to them and covered them back in 2010/11 in Portland Oregon before I moved to Vegas. I always liked her format. She even brought in stars such as Masuimi Max to Dante's.

But she pulls a punch in a new department now, women's fitness. I had no idea until I recently reconnected with her that she had been taking her fitness to a competitive level. Her family and full-time career day job aside from producing regular burlesque events which are well attended, raising three boys, and working full-time, she took on a new goal and I had to get her to tell us about it. Ellie always had a fit body, but now she's got a hard body, as hard as it gets. I found out how it happened and how she stays inspired.

FT: Ever since I've known you, I knew you worked out. But recently you have taken it to a competitive level. How did you get into that and what inspired you?
ED: You're right, I have always worked out, but the consistency was the part I lacked. From about age 30 to now, I would go hard for about a month or two, then come to a dead halt, then back on it and dead halt. It became this repetitive inconsistent thing and I finally wanted to put a stop to that. I have two cousins who have competed of which one is still competing. They most definitely inspired me. Also, at the beginning of the year, I saw this gal on Facebook who I started to follow as she took on this journey and ended up competing as well. So it really got me to thinking 'I want to do that'. I started out with a desire to enter into Figure, which is different than what I ended up doing, which is actually Bikini.

FT: How have your accomplishments as a fitness competitor changed your outlook on life?
ED: I have to start by stating that I took this on as a personal challenge first and foremost. Getting my body to a competitive fitness level was already a win for me and then actually taking home two 4th place trophies just inspired me to want to do it again and be even better for the next show. Without question, taking this on has changed the way I look, feel, and has changed my physical and mental, and overall wellness. It's truly the best thing I have done for myself. I definitely have more confidence and my energy level has changed quite a bit. There really aren't any words to describe it! As far as my outlook, I feel like if I can accomplish this, I can accomplish darn near anything! I am riding on a constant high of good endorphins now that I workout consistently. I love it, It's actually even inspired me to consider becoming a personal trainer on the side. I just want to share good health with everyone who wants to know about it.

Ellie Rises to the Fitness Challenge 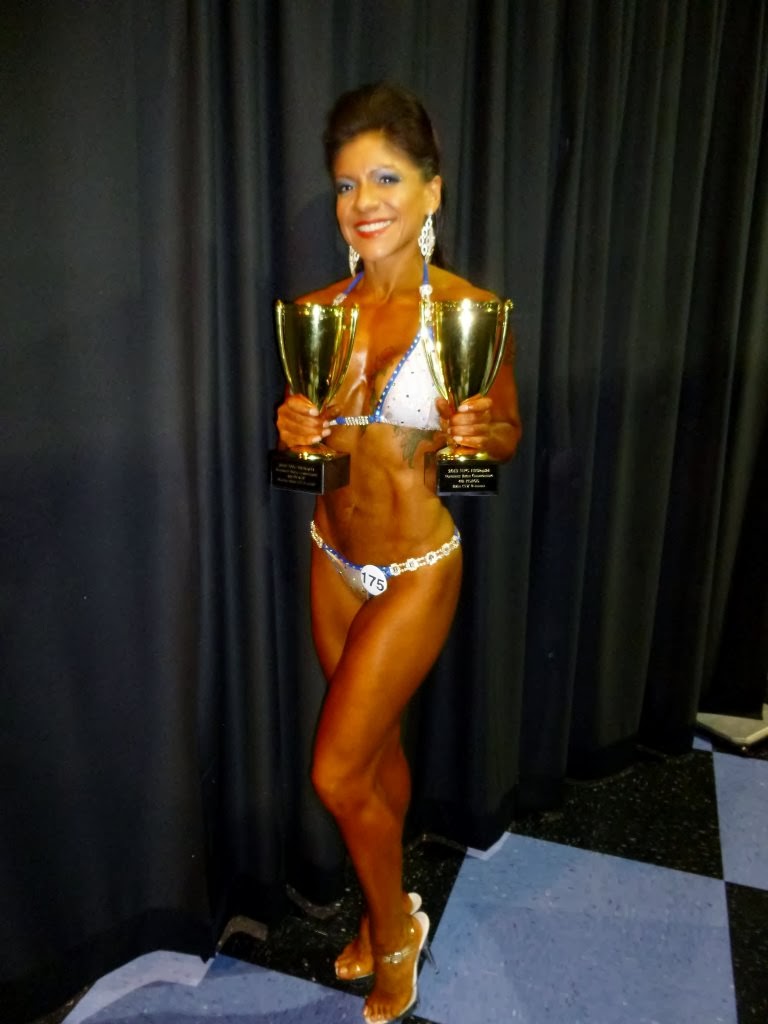 "This is me....age 38, three boys, full time career, Burlesque performer and show producer, and all else that falls in between. This is me, no excuses about time, money or whatever other excuses exist! I did the thing that I set out to do! All that hard work finally got me into a show! As you can see from the photo, I placed top 5, taking home two 4th place trophies: Masters Bikini (age 35+), Open Bikini (all ages, 5'2" and under). From the day I met with my trainer on July 8th and even until now, I haven't stopped living, breathing, and sharing my fitness journey, although I'm sure many wish I would stop. Ha! But there is no mute button when it comes to passion! Can't turn that stuff off. No way! And now I get to share my experience with anyone who wants to know about it" (sic) [SOURCE]. Ellie Darling from her blog on her fitness journey.

FT: Are you still producing and performing Burlesque? When I left you were one of the few shows that used live music, and I remember you were producing really fun shows up and down the Oregon Coast.
ED: Yes, I certainly am, though I have scaled down from those days quite a bit. I will be entering the third year of my quarterly show called "Giggle & Blush Peepshow" held at the historic Star Theater in Portland OR. My thought behind this was to create an elite show that features an international headliner as well as a great venue for Portland's finest performers to display their beautiful performances in a swank and classy atmosphere. I do bring in live music and that's something I won't ever let go of. The bands or solo artists usually open with a 30-40 minute set. The show has been a blast to produce and I've been able to meet some of the most outstanding and eloquent performers such as Ginger Valentine, Michelle L'amour, and Perle Noir to name a few. I feel very fortunate to have the fan base that Giggle & Blush Peepshow has earned.

FT: Can you tell us about what you have coming up in both competitive fitness, strip tease and burlesque? Inquiring minds want to know.
ED: After my first competition on November 2 [2013], I decided that this was something that I plan on continuing for years to come. It gives me a goal to shoot for and makes me accountable for my health and nutrition. It's simply a great new thing that I've added to my life and plan to continue as long as I'm physically able. I would actually love to become a professional competitor, but that requires a certain amount of first, second, or third place wins. To be honest, since I am so new to this, I don't know all of the ins and outs. I'm learning as I go.

As far as burlesque, I will continue performing and producing Giggle & Blush Peepshow. I absolutely love where it's going. There is also something being talked about between two other very influential performers and I that may happen this year. It was an idea I tossed out there and realized it had been on their minds for about the same amount of time. We're being hush hush about it though. When we're ready, we will certainly reveal. It's kind of fun to have something up the sleeve.

And that she always does. In fact this is one of those always industrious Oregonians always worth waiting for the reveal from. From car-club and music events to burlesque, to now, fitness in Bikini contests, Ellie Darling likes a challenge and never stops. Congrats Ellie on finding new challenges that keep you in the zone. Your accomplishments here are stupendous. What a mom.

See elliedarling.com for all that you need from this
model / performer / producer out of Salem Oregon.

Follow her blog on her fitness journey at
http://www.elliedarling.com/fitness-journey.html

CLICK PHOTO FOR SLIDESHOW
OF ELLIE DARLING IN
FITNESS CONTEST
ON FLICKR.COM
http://www.flickr.com/photos/missfrankietease/sets/72157639845014743/