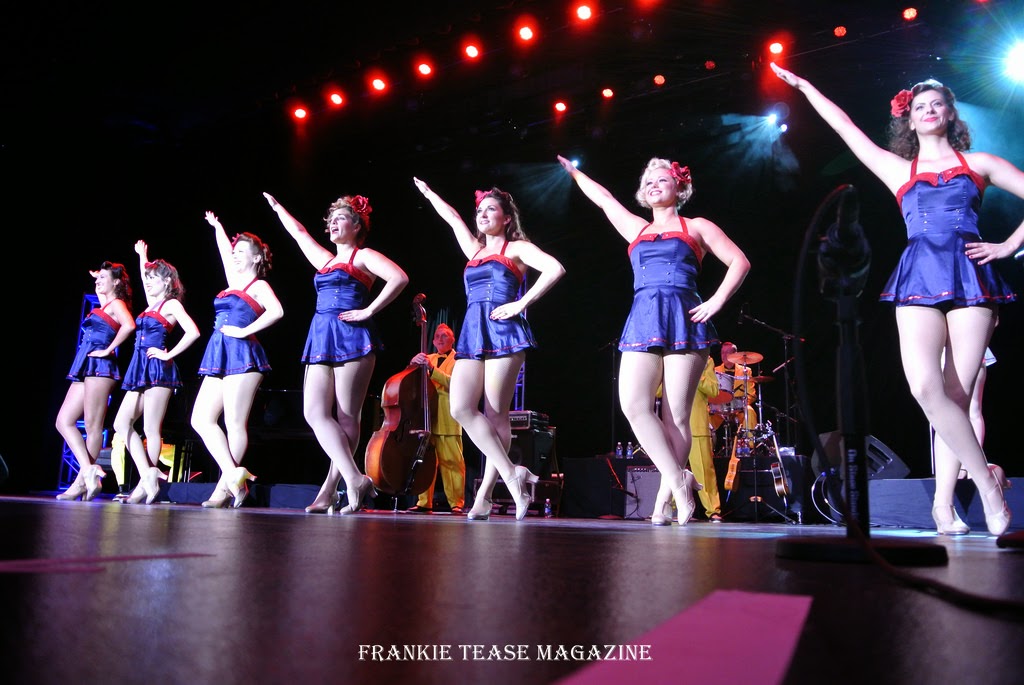 Attending Viva Las Vegas for the third year as press (three more before as a pedestrian), I began to see certain trends. Number one, the event only gets better. Number two, the ancillary shows are expanding and maintaining their yearly fans. Some producers are in, and others are out. But we saw several wonderful mainstay acts such as Deke Dickerson, Big Sandy, Miss Wolff's Jive Dance, The Satin Dollz with Jive Aces, and the oldies but goodies we all want to hear before they leave the earth. The ones who cemented Rockabilly in its heyday in America. Some would say that rockabilly is folding in more and more new fans and followers from all races and walks of life, and has taken on a life of its own decades ago.

It's time to recap the 2014 VLV (Las Vegas) event, the 17th of its kind. I think one thing Tom Ingram (Los Alamitos, CA) knows best: 'If it aint broke, don't fix it'. He always makes sure there is lots of cheap beer for his greaser patrons (this year it was Budweiser), plenty of vintage shopping for the truly obsessed, and plenty of Swing and Jive dance chances until 7 am each day. People come from all corners of the world to gather new 45's and new music on CD, as well as vintage and vintage inspired vendors, plus the exclusive annual Viva Las Vegas official merchandise. It's all about collecting for some people, and Thursday's indoor bazaar was mobbed with those wanting first crack at the merch for the weekender's 17th year.

Contests in tattoo, Jive dance, pinup, vintage swimsuit, bowling and burlesque took place during 2014. To see a more detailed report on those see our live blogging for all four days from this page: VLV overview. There, you'll also find the entire Frankie Tease Magazine Viva Las Vegas live coverage from years past including 2012 and 2013. The weather for this year was in the high 80's and Sunday for the pool party reached 96. But of course, it's a dry heat.

There were over 75 bands which played throughout the four days, and a host of national DJ's popular in the genre, including Dell Villareal who hosts his own live radio show online. DJ's brought 45's, CD's and MP3's to get the job done. Thursday's inside headliner was Kim Lenz and the Jaguars who played a lively set at 11pm in the main ballroom. Lenz is a cross between the sound and snarl of Elvis and red hair and figure of Ann Margaret. Who better to play at Viva Las Vegas? Kim threw her shoes aside mid-set and launched into a song written by her and Big Sandy entitled "That's the Breaks". She seemed delighted in the crowd saying "Oh what a great turnout".  See our video of Lenz, too. The backing back for many artists was the Fly Right Boys, Big Sandy's band, who are great with a wide range of western swing, jump blues, straight country and rockabilly stylings under their belts, having toured decades with Big Sandy. 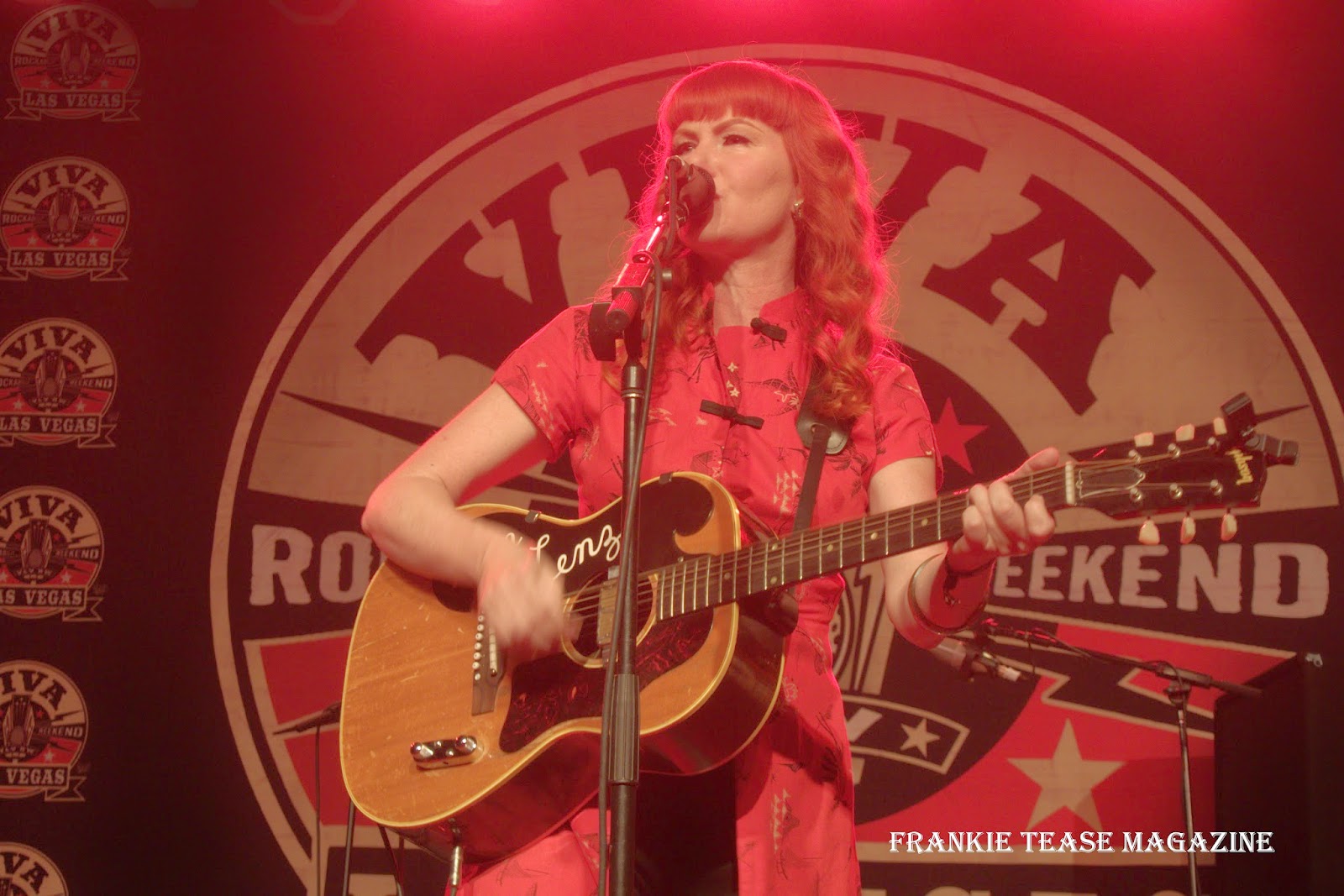 Friday I arrived early enough to start a backstage extravaganza with producer of ten shows in four days, Audrey Deluxe. She also performed burlesque and hosted a total of 9 of those shows. The woman was busy. Calm, cool, and collected the burlesque side-kick of Organizer Tom Ingram carried on some traditions such as the fashion show Friday and had already created a new tradition "Burlesque Bingo" which she's been bringing to L.A. since 2002 - this is the fourth year it's been a mainstay at VLV. I followed her around to see the amazing international line-up for the Burlesque Showcase, the tears and fears of the Burlesque Competition before and in the wings during, and the rowdy Burlesque Bingo players and show-goers. This one hour candid video is what happened.

One could conceptually make it an all burlesque weekend, very easily. With ten burelesque shows, and that doesn't include the Saturday Car Show Miss VLV Pinup Competition, and the Vintage Swimsuit Competition. There's a lot of beauty in them thar four days I tell ya. It's fairly amazing. One could also make it an all music no burlesque quatro days, very easily. Whether you thrive on recorded music (the hotel ONLY plays pre-1963 boppin' music for four days) or your like the live experience, Tom Ingram brings in enough acts to sizzle your ears for a while. Betweeen the local Southwest and Los Angeles choices, and then the national and international acts brought in, one can add new sounds to their collection easily. Adding sounds can be by cd or record at the event, both are readily sold. And of course, you can get it signed at the merch table after each performance. I was thrilled with Moray Sochat Thursday upstairs, Bubba J (endorsed by Big Sandy) from the UK, Kim Lenz, Lil' Mo, Hayden Thompson, Imelda May, and the Jive Aces who's lead singer sounds impeccably akin to Sam Butera, and do his material justice.

The car show included two stages this year, and 800 cars which were pre 1963. But there was a little red carpet area for three new additions on display this year. Film Celebrity automobiles Christine and Herbie from the Love Bug. The Orleans Casino Convention Center parking lot is the site of the car show. It was hot but breezy and balmy for the show. One side of the vendor area was all the fashion show participants from the day before. 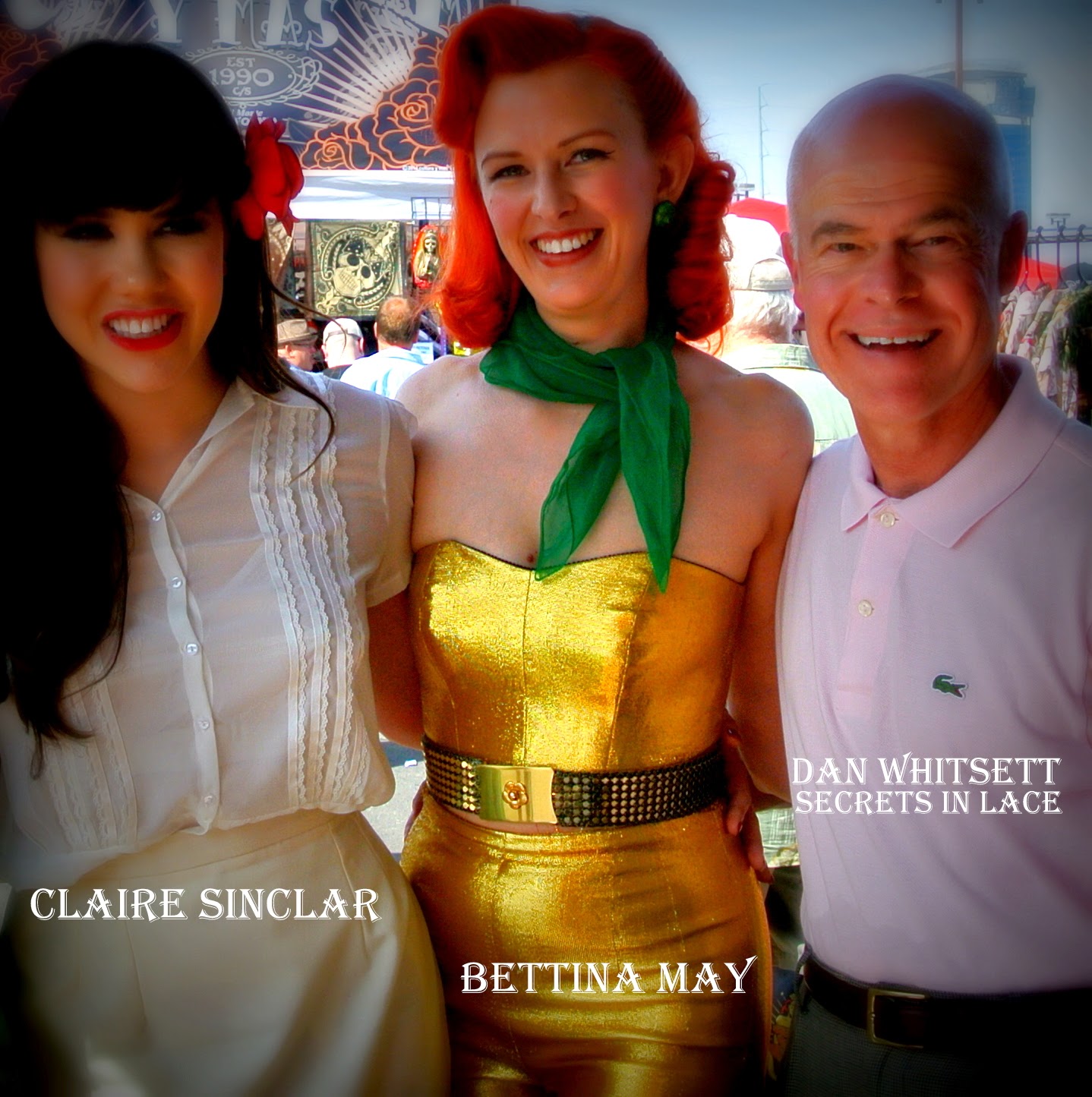 Going back to Friday, the absolutely stellar production of the Burlesque Showcase ran three shows in the 800 seat house. Featuring more power performers than any VLV ever before, the Italy, UK, and National (lots of New York) performers took the Viva audiences by storm. There was an all female cast including host Cora Vette present, as well as one male circus performer known as Christopher Wonder of L.A. The line-up was: Audrey Deluxe (L.A.), Cleo Viper (Italy), Darlinda Just Darlinda (NY), Gal Friday & Peek-A-Boo Pointe (NY), Ophelia Flame (MN), Roxi D'Lite (MI), Angie Pontani (NY), Immodesty Blaize (UK) and world-famous Dirty Martini (NY). It doesn't get much better than that folks. We were treated to an epic collaboration of Tom Ingram and Audrey Deluxe for this stellar showcase production. It was done to a variety of recorded music in the Orleans Showroom. The stage manager was New York's own Bishop of Burlesque.

Gal Friday and Peek-A-Book Pointe did their now internet famous routine of tassel / assel off, but added a special fight scene just for the Viva audiences (not on the YouTube sensation edition). Fun. Angie Pontani went on pointe. Immodesty Blaize did a three tier complex act starting with a veil (which was a bit religious in style) and descending into detailed floor work with huge belly dance wings in a dance of fluidity and balance. Cleo Viper was seductive 20's style snake's companion. Audrey Deluxe was a majorette who twirled and seduced. Roxi D'Lite performed her newest act Madame X. A huge prop that looks like a big red X, the prop then turns to reveal a gimp in bondage. She meant business. Dirty Martini? She started with the pinkest gown, a seductive glove removal, no I mean really seductive. Then the curtain opened to reveal the Zorita tribute spider web. Hilarity ensued. We see once again why Dirty Martini has been voted #1 in the world by fans and burlesque professionals alike. Also Brooklyn's Darlinda Just Darlinda performed her kitchy and sexy neon act including hip and chest shimmy isolation to write home about.

The Sunday wrap-up was also another keeper. The Sun Rockabilly Show featured four original recording artists from Sun Records, a label that practically gave rockabilly its start. Those artists were: Sunny Burgess, Carl Mann, Hayden Thompson and Narvel Felts. It's at moments like these, that I realize what keeps me interested in this genre of music for over 20 years. It touches a nostalgia of America within me that I can't get anywhere else. A nostalgia for simple things, simple talents, and god-given high notes that can't be manufactured by auto-tune. Thanks again Tom for another great year of Viva Las Vegas Rockabilly Weekender. Now, at time of this article I hear the Orleans Hotel is already sold out for next year's VLV 18. Let's get hoppin everybody. See you there.