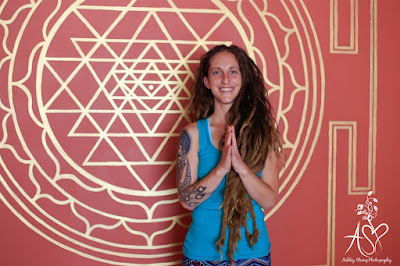 Not your typical 'hippy', many years ago, Dharma Shakti began her path at age 19 in the Ayervedic arts. Dharma went from massage and healing to teaching yoga and motivational speaking, rooted in the spiritual. Named by the Long Beach Post as one of the "40 Under 40" in 2013, she has taken her business model forward and touched a lot of lives in doing so. Considering the amount of patience it's taken her to expand, get her own studio space, and train teachers, Dharma's small business story is worth note for many reasons.


Integrating her family wholly into her practice, Dharma's studio is nearing year two and includes Mommy and Me type toddler-friendly classes, as well as classes for adults. Her teacher-training is ever-more popular and has been selling spots out again this year (and offers accreditation). Her husband Jah Polo (a local reggae musician) is a new addition to the class. "Yes he's in teacher-training this year" Dharma said one day as I attended Yoga on the Bluff. A point you can find on 'Google Maps', Dharma's Yoga on the Bluff takes place everyday at 11am, with the help of other instructors and is completely free. Dharma is the instructor on weekends still, as she has been for almost a decade. Solidly providing free yoga on the bluff outdoors for over seven years, Dharma never took a dime until the second or so year when a friend insisted on a donation box. Now with an instructor permit, Dharma has uplifted thousands of people who can't afford a studio class rate, or who love the outdoors and would prefer to take her class there and donate to her cause. 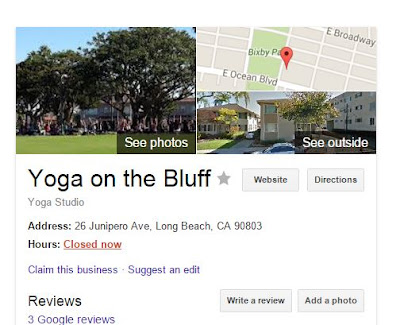 Many types of people can be seen at the outdoor event, including in and out of shape participants. It all started when she used to bring people to her classes with free passes. As she instructed at other peopele's studios, they explained the free passes are for one time use. A friend in need suggested Junipero and Ocean where the bluff overlooks the ocean in Long Beach, CA, and the rest is history. And it has really become a bright spot in Long Beach. Dharma joked "it's Down Dog, not Snoop Dog" in Long Beach now. She also informed me that the city of Long Beach is re-branding the city as healthy.

"The latest is my friend told me they're listing 'Yoga on the Bluff' on rental info and property for sale in the neighborhood. That's a first" she stated one Saturday in January, 2016. Who can complain about something that brings property value up in the neighborhood? Well no one, not even the city. In fact the city of Long Beach has created a special permit for personal trainers who use any park and recreation property. Any gathering over 25 requires this to use parks and recreation. I imagine those other newer classes never get 200 in attendance as Dharma does on weekends, though. This is what a fore-runner looks like folks. Who else was really doing this when she started in 2007? Almost no one in the U.S.

Her donation-based model has presented unique issues for the studio too, such as training people that donation-based is not free. Because of studio overhead, they must meet their own quotas and so the suggested donation for studio classes are $8-$20 for drop-in classes and $20 and up for specialized workshops. Siting the owner of Santa Monica Power Yoga as the first studio to go "donation-based" in the nation, Dharma is happy with her decision to do so. "Life doesn't have to happen to you. You don't have to live a life by default. The yogis strongly believe that you can live a life be design" Dharma states during a class at Yoga on the Bluff.

And she has lived her life by design. With two beautiful sons age five and eight, Dharma has done everything according to her beliefs including home birth and the vegan lifestyle. Considering herself a teacher and practitioner of what she has spent over a decade studying, you can feel the radiation of her bliss and strength often, in her presence. It's uplifting, it's a gift. Going way beyond trite, Dharma is on a mission to bring positivity and peace through her own lectures and yoga instruction, as well as creating "peace ambassadors" (aptly named instructors at her studio).

During 2016 Dharma is going to expand - due to multiple requests - to offering video and live classes online. A work in progress, the membership or download offerings are coming soon. If you are looking for inspiration, looking for motivation, and fitness for mind and body and soul, you just might find it with Dharma Shakti. Her dedication to offering yoga to as many as possible, really shows the life choice she has made. While others offer gym-like yoga, Dharma sets herself apart by also including the important meditative focus elements as well as chanting the traditional eastern meditative melodies (and has an amazing voice).

But she doesn't 'shove it down your throat. "I just want people to know there are other steps on the ladder in yoga" she explained in my audio interview. Once you experience what she has to offer, make sure to thank her. Many in the Long Beach community already have including the businesses like 40 Day Cleanse which she collaborates with or Vedaspices a friend and colleague who teaches at her studio and provides ayervedic tea. It's inspiring to see someone walking the walk not just talking the talk. And as woman in business, she's absolutely crushing it. Get to know Dharma. I don't think you'll regret it.