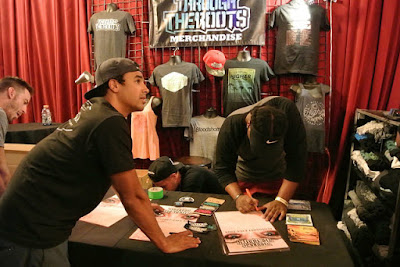 Left to right: Taylor, Evan, Budda of Through the Roots

These last couple years have been fun for reggae. As I settled back into living in my hometown of Long Beach, California, I have found many great reggae shows including live dub, conscious, and roots music events. Many of you may not know but Long Beach (aka LBC: Long Beach California) was a mainstay of live reggae in the early 90's, birthed Sublime, and has always had a ton of islanders as its inhabitants. Lucky us.

2016 was really strong for Rebelution and they brought a lot of great bands on tour with them for the Falling Into Place tour. That's how I heard about Through the Roots (San Diego, CA). In addition they were always creeping into my Stick Figure Pandora station. With terrible luck, I arrived at three different shows they were playing in '16 / '17 and missed them due to really bad Uber drivers (you know who you are) two of the times, and rain, the third time (One Love Cali Fest 17, I couldn't hang past 8pm in pouring rain and mud conditions).


When Through The Roots (TTR) announced the Long Beach March 22, 2017 show, I pounced. For 40 bux I bought the V.I.P. Experience, and had no idea what to expect. I accidentally clicked the wrong town and it was straightened out in a couple emails really easily. The night of, we were all emailed a 7 pm arrival time. I was about on time, and the point of contact appeared and registered each of us with an I.D. check. The Federal Bar is a swanky Downtown Long Beach Venue, which is supper up top, events down below. The venue is complete with a huge circular steel door: a secret green room turned from an actual bank vault. The security and waitstaff were mostly large black men who were easy on the eyes.

We were lead below, and took a seat in a dark corner in the lounge seats. The band was rehearsing, merchandise table was being erected. They were told we had arrived, and lead singer Evan asked on the mic what we'd like to hear. Blood Shot Eyes was rehearsed and then the band disappeared. We waited mingling around and out of the back or side door (not sure), Budda Foster appeared with a smile and a hug for me (vocals, bass). Damn that's pretty cool and surprising. The entire band was hugging it out with all the about dozen V.I.P. guests. They walked us to the merchandise table and started writing. They wrote and autographed a poster for each of us, and a V.I.P. pass as well. We mingled. People were talking about how many times they tried to see the band and what shows they had gone to. Brady Orear talked with me a few minutes about what music I listen to (Keyboard).

Next we headed to the red velvet curtained corner for the V.I.P. Photo opp. We took group photos and individual photos. The guys are very nice and patient, obviously prepared and very organized. They treated us like V.I.P. which we weren't. Greetings were exchanged all while opener and fellow touring band The Late Ones did their sound check. They sounded good. I stepped up top to smoke a joint and luckily, briefly shared it with lead singer of The Late Ones. Grabbing a second drink, I finally went back downstairs. It was filling up. In a ladies' room mingle I met the Friend of the Birthday Girl of the night and Band Aid (nickname: Corona) who informed me of how many shows she'd been to. She's a serious number one fan, and really nice.

The conscious reggae music band that Budda Foster called their 'boys', was smooth in their styling. Harmonies, energy, rapping, Rasta lyrics, really fun stuff. They pumped us up just right and create a small frenzy for their tie-died t-shirts. They are worth a listen if you like reggae rap rock music. The vocal talent reigns supreme here: Insagram Video of The Late Ones. And the band's name? "The name “The Late Ones” pays tribute to all of the late and great revolutionaries who have come and gone like Bob Marley, Tupac, Jimi Hendrix, Steve Biko, and John Lennon, just to name a few." states their social media page.

As Through the Roots took the stage we all took off together on the ride. Blazing through their memorable originals they went from straight-ahead reggae beats, to calypso, rock, samba, and more. Their versatility is refreshing and Evan's vocals are as sweet as they come. The characters are well defined, the band knows who they are and they are ready to go much bigger, and are. The highlights for me were "Fed Up", "On this Vibe", "Higher", and "Slow Down", but I liked them all live just as much as in my headset.

Solid synth keyboards from Brady, tantalizing sugary guitar riffs from Corrick, Funky and lively bass from Budda mixed with the rock and syncopation of Taylor are topped off with buttery multi-octave vocal abilities from Evan. They are ready to rocket, be warned. We were also treated to special guest saxophonist from Rebelution.

The San Diego band gave us so much that night it was hard to imagine. The band has a great talent and live feel, and sticks with love songs and socially and globally consicous music. When I asked Evan during the mingling what his favorite song to sing was, he immediately answered "Higher". A lovely original they have which is a demanding vocal assignment. Its' a song about good vibes and working together to make the world a better place. The guy is not a cliche' and neither is their diverse ethnic band. Lots of love already exists for the band, and they are spreading more upon contact. I highly recommend their V.I.P. experience before the price explodes. You won't regret it.

Catch their live schedule and their merch at ThroughTheRoots.com and on their social media. Fun fun times. Tell 'em I sent you and to play a larger venue next time in the LBC.


Please send corrections or suggestions to