My Hometown Has Been Co-Opted By Conservatives, But LBC Values Live On 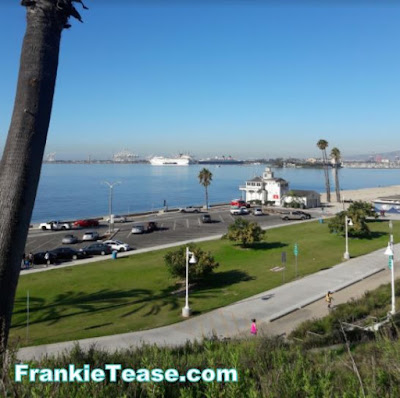 Having been born and raised in Long Beach, I was in for a shock in returning that I hadn't prepared for. I knew things had changed, because friends and family had told me about raising rents (no rent control) and disappearing arts, music and culture. But I also found that the epic laid back attitude of Long Beach has also been challenged. Oh no... At its core my city is still as popular as ever for subversive counter-culture, (Snoop Dog, Sublime) skateboarding, water adventures, culinary delight, adult education, and festivals. And you cannot even mention Long Beach, without mentioning the Queen Mary, which has a hotel and events park that is beloved to locals and visitors alike.


Neighborhoods
The real estate folks have wasted no time sectioning off neighborhoods and selling their "historic" value. The Mayor of Long Beach, Robert Garcia has made haste in signing a bunch of development deals, the inconvenience to current residents be damned. Plans include a complete renovation of the civic building and Downtown Public Library, a new student housing building, and an expansion of the Queen Mary to include a Disney-like park encouraging more tourism. Most tourists never make it past Cherry Ave. unless they stop in Belmont Shore. Areas like North Long Beach, haven't changed, and very few locals have been employed by the developments, after all its clearly to line a few people's pockets, not enhance the lives of the Long Beach residents.

Jobs
Most people work out of the city, with the exception of those who have a precious few good paying secure jobs with the city, or long-standing businesses. Students get jobs first, family and friends next, and everyone else is on their own, so many usually end up going to L.A. or O.C. for jobs. There is no concern from civic leaders about this whatsoever.

Marijuana
For a town famous for its weed culture-though medical marijuana is legal in Long Beach and California for a few years-it has only two dispensaries. We've all watched them open and close for years. Not sure what the issues are in Long Beach but it's not convenient for smokers at all. On January 1st 2018, recreational marijuana will be legal in California, and I hear it has been legalized at beaches and parks by Governor Jerry Brown, a surprising move he cites was inspired by watching Colorado and Nevada legalize weed, then offer no place for people to smoke it. He must see dollar signs here, or could it be he actually cares about the residents? A side note, smoke shops too will be able to sell weed with special permit. Ask your local shop about that.

Tattoo
The culture of tattoo art is strong in Long Beach and the Queen Mary hosts the Ink & Iron Festival celebrating it. The oldest tattoo shop in America resides in the heart of Downtown Long Beach, called Outer Limits, navy boys used to know it all too well back in the day. There is a few tat shops in the city, but so many more in Orange County. I find it a bit ironic that the most Long Beach shop is located at our neighboring city, Seal Beach. Still Life Tattoo houses the guy that did the now famous tattoos / album art for Sublime, singer and artist Opie Ortiz.

Rebranding
When I moved back a few years ago, I noticed right away that Orange County constantly included Long Beach in local events listings etc. yet, Long Beach is clearly in Los Angeles County and always has been. Being a halfway point between two counties, this co-opting has only gotten worse. Believe me when I say no native Long Beach person agrees with this Orange County stuff. We are PROUD TO NOT BE IN ORANGE COUNTY, and always have been. Don't get it twisted.

Diversity
Long Beach is second only to Los Angeles in diversity in the United States (see the CNBC article), with large communities of all races including those from India, Vietnam, Thailand, Africa, Mexico, The Philippines, Tonga, and many more varieties. It has been this way since I was a kid, and I am proud of that in contrast to not-so-diverse places I have traveled and lived.

The Police
Many of the waterfront police are in plain clothes, and manage the homeless, tourists and transients which find their home outdoors here. Newly, police have every type of vehicle in their fleet, to confuse us: Jeep, SUV, motorcycle, sedan, and more. But, they didn't have the budget for police body cams. Mmmm, interesting. Long Beach has a history of violence toward its detainees, I'm really not aware of that improving, I just saw six officers subduing a man on Anaheim just two days ago, all I could do was shake my head.

The Game
The biggest games in Long Beach are religion, education (CSULB, LBCC) and tourism - in my opinion, in that order-I am happy for the second two. I am more unhappy than ever about the leniency shown to religion in zoning, taxes, and permits. I include the eastern religions, and ashrams in this category. I always loathe watching hard working people shove money into donation boxes, which could have been put toward college or helping a family member or friend. Long Beach needs to look at its addiction to religion, post haste, and how it preys on the young college students that fill this town.

CSULB has been a driving economic force in Long Beach and now ranks the 9th best school in USA rebranded as Beach, naming its alumni Beach Family. The Queen Mary brings tons of tourism, as does the Long Beach Convention Center year round, and Gay Pride Festival annually. More effort needs to be put into locals (besides just students) getting tourism jobs.

It's a Dog Town
The dog culture is only increasing in and around Long Beach. Rosie's Dog Beach started it off, and now there are self-grooming spots, dog walking, dog parks, and dog friendly restaurants. The tradition is welcomed by most housing with the normal weight limits. The enthusiasm in training and mingling dogs is fun and so photogenic! Check MeetUp.com for groups celebrating certain breeds for the Long Beach area. Do note, dogs are not allowed on beach bike path.

The Future
As Long Beach tries to survive the co-opting of its diverse artistic self by conservative hustlers, it shows its teeth now and then at places like Portfolio Coffee House LLC, 4th Street "Retro Row", music machine Alex's Bar, and the many skate parks all over the west side. Lower rents drive OC and LA people to buy here, commuting to their jobs, and that's not changing. Art exists by non-profit organizations buddying up to the city council for grants and collaborations (ie: Made by Millworks, formerly Made in Long Beach) but independents don't survive too long. Check out 1897LB who is part of the future of Long Beach for tourists, locals, and natives alike.

The Ocean
Recently the city has been doing studies on removing the breakwater, which many residents are in favor of. The breakwater eliminates any surfing, and that would be a great change for us. The water is full of contaminants now from reckless City of Long Beach Dept. of Oil greed, fracking projects, and the so-saying 'commitment to green' Port of Long Beach. Many do not go in the ocean due to its filth here. A sad thing to admit. For being the Aquatic Capital of the USA, Long Beach needs to address the issues with its many rivers, lakes, and ravines. We need to protect the water for now and future.

Survival
In all, the city is all business, as people work multiple jobs to survive this hellish economy. Businesses are bracing themselves for the raise in minimum wage, which will go up incrementally toward $15 until 2020. Large stores like Walmart have closed many small businesses and then like the store downtown, closed, leaving a vacuum, and a lot of layoffs. A recent Downtown closure of a health firm is leaving 2000 plus people unemployed creating a ton of Uber, Lyft, and food delivery drivers.

If you are visiting Long Beach, you will absolutely love the fun and funky vibe which is strong in Long Beach. Fly directly into our own airport, skip Los Angeles traffic. We like to say hello to our neighbors, and we don't like to live too fast. We like our art, music and diversity, and we have friends of every race. Due to the history of this city, the current climate will eventually relent, I am confident. The backbone of Long Beach has always been working class, art, poetry, tourism, and the celebration of life with music. The residents love their weather, cycling, roller skating, skateboarding, and learning the baseline to Sublime songs.

The Jazz Festival and Navy Base may be gone, they can try to brand the naughty out of our city and replace LBC with LB, but hard as they try, everyone knows that a native Long Beach rapper-Snoop Dog-put this little town on the map. I for one, will not forget the LBC of April 26, 1992.